Everyone loves a good combo. Pineapple on pizza, for instance, or Lady Gaga and Tony Bennett (seriously, they’re great together). The Nest Hello video doorbell and Nest x Yale smart lock are another example of a good combination when purchased together, though only when they’re paired up with other Nest devices.

The Nest Hello and Yale smart lock were both announced back in September 2017, though they weren’t available until recently. Both products are part of a larger family of devices, which includes products like the Nest Guard and Nest Thermostat, and they’re components of what’s essentially Nest’s smart home platform. There’s even a connection standard that unites them all called Google Thread, a proprietary network protocol that keeps the Nest devices synced up without clogging your home’s Wi-Fi network.

The Nest Hello and Next x Yale smart lock retail for $229 and $249, respectively. And while each device plays its part well in making life more convenient, the Nest Hello is the only one of the two that’s truly an outstanding product on its own. 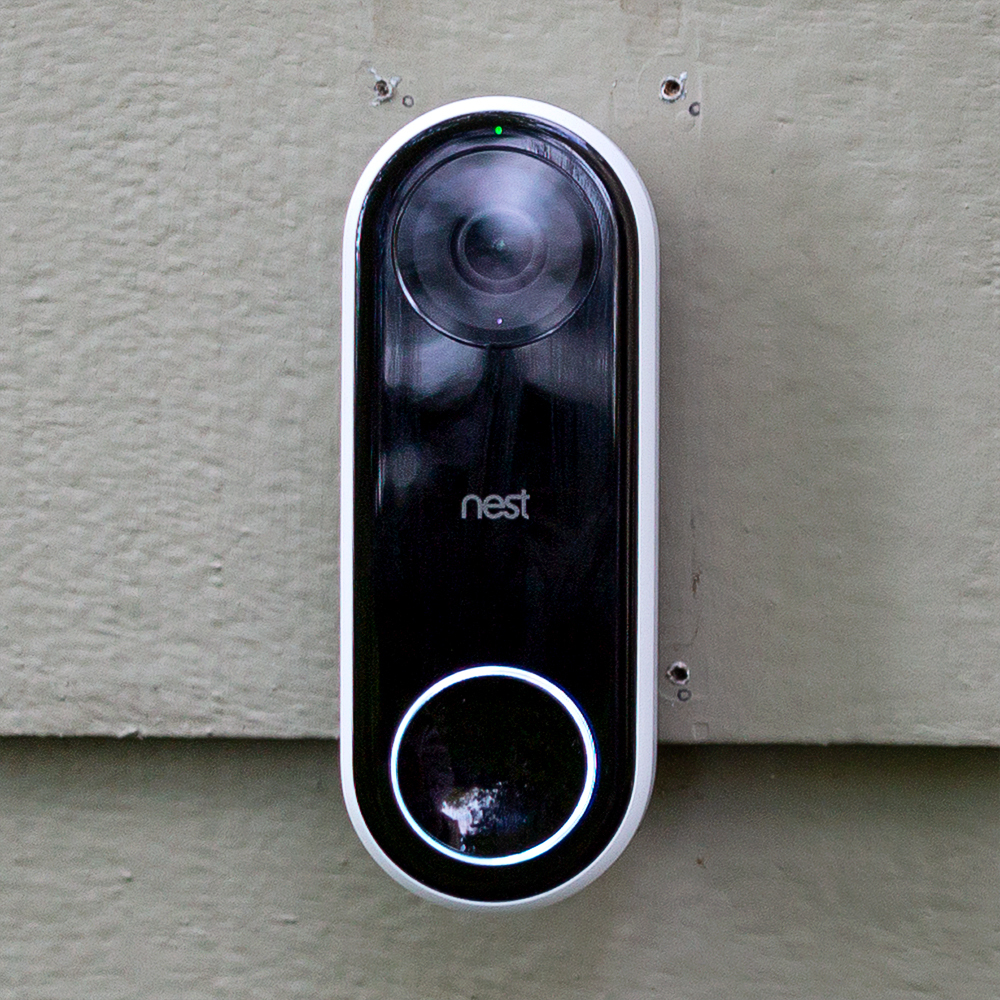 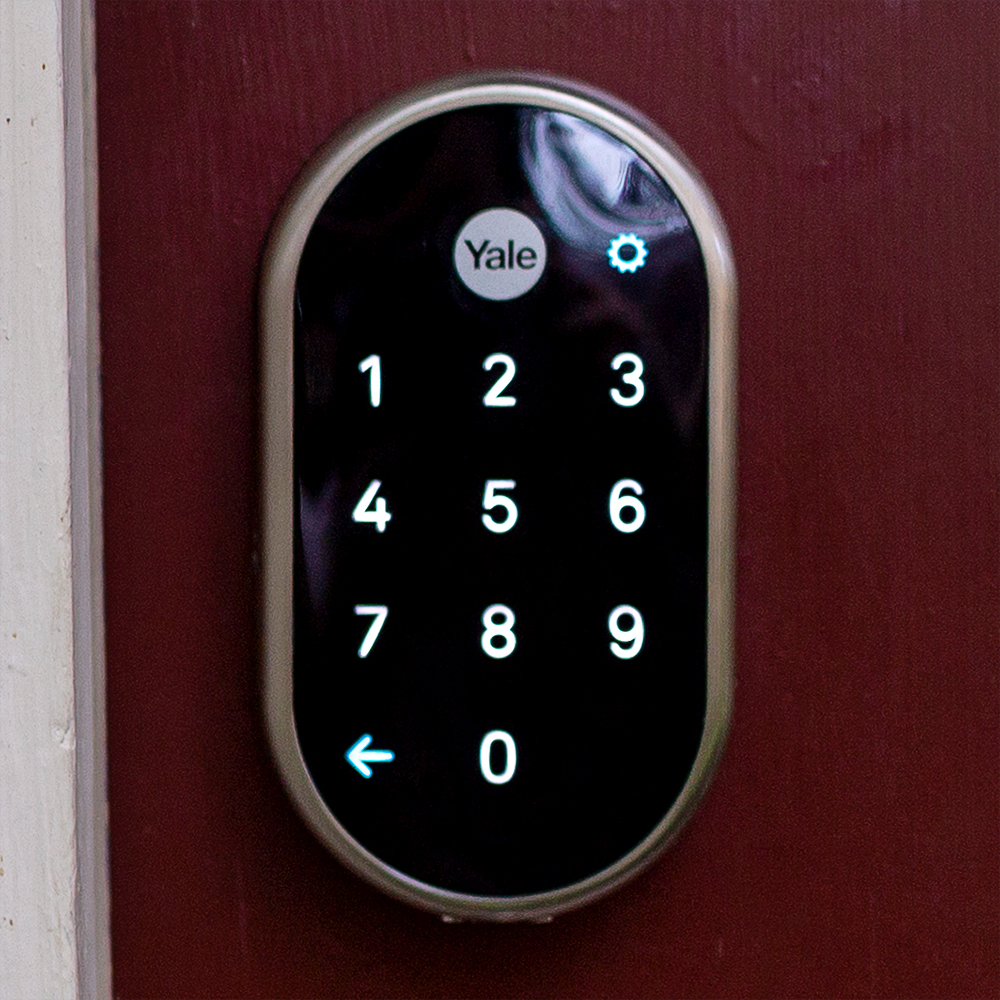 For a long time, if you wanted to buy a video doorbell, the first recommendation you’d probably hear was the Ring video doorbell. The Nest Hello throws a wrench into that suggestion engine, however, and the stakes are even higher. Amazon now owns Ring, and Google owns Nest, and with the two companies developing their own impressive smart home platforms, choosing one video doorbell over the other is almost as consequential as choosing between Android or iOS for your phone.

The benefit to siding with the Nest Hello is that it’s already a part of a robust ecosystem of devices. There are thermostats, smoke detectors, security cameras, and a bonafide security system with professional monitoring. Once they’re linked together, you can control all of them from the same app, and even set up automation schemes. At present, the Nest Hello works with the Yale lock, the Nest Secure, and the Nest Protect, though you can use IFTTT to link the doorbell camera to other connected devices in your home.

The Nest Hello comes bundled with everything you need to install the device outside your door, save for the screwdriver and drill. The box includes a connector for an existing chime, a release tool for removing the doorbell if you ever need it, masonry drill bit, wall plate, wedge, extension wires, wall anchors, and screws. If you need a battery-powered doorbell, however, perhaps it’s best if you stop reading now. The Nest Hello requires wired power to work, and does not offer a rechargeable battery option like some Ring doorbells.

Installation is easy if your wires already supply between 16- and 24-volts of power. The doorbell secures onto a metal mounting plate, and then there’s an angled bracket to help steer the doorbell toward the door. It’s a weird install if you have non-traditional siding on your house, like the slanted slabs on mine. Ring’s horizontal mounting bracket was better suited to work at that angle than Nest’s vertical one, and as a result, the Hello looks crooked on the outside of my house. At least the camera’s 160-degree field of view makes up for that folly, as I can see everything from my front steps to the parking lot.

After the doorbell is clipped in, then comes time to install the chime connector. Connecting it isn’t much of an issue, but it was cumbersome to ensure that all the wires were powered up enough so that we could hear the chime toward the back of the house. The chime connector is also sort of bulky, so it might be hard to stuff into existing setups.

If you’re familiar with Nest’s devices and you already have a few set up in your home, you’ll have no problem using the Nest Hello. All of its settings and controls are based in the Nest app, which itself is relatively straightforward to use.

Like the Ring, the Nest Hello pings your smartphone with a notification when there’s motion at your door, or sound if you choose to monitor for that instead. If there’s a ring at your door, you can tap the notification to jump into the Nest app and start streaming. There are options to talk through the built-in microphone and speaker, send through a pre-programmed message read by the robot voice embedded in the doorbell, or you can watch from your smartphone to ensure everything is up to par.

Annoyingly, the Nest Hello is sensitive to false positives, offering up a notification for every sound it hears or a leaf blowing in the wind. You can set a detection zone within the app to help mitigate the inconvenient cluster of notifications (especially if you’re using the app on Android), though there’s also an option for the camera to only notify you when it sees faces.

That’s the other thing about the Nest Hello: there’s an element of machine learning embedded throughout this entire product. In this particular case, the doorbell is suited to recognize familiar faces, so you can store an image of yourself, the members of your household, and other relevant people for the machine to know. If you don’t already have the Nest security cameras in your home, this is going to be something you’ll have to reckon with before even purchasing the doorbell. I’ve personally already consented long ago, and frankly, I appreciate that the notifications Nest sends me now state who’s at my door. There’s safety in familiarity.

The Nest Hello’s other compelling feature is its high-quality video mode, which streams at a resolution of 1600 x 1200 at 15 frames per second. It’s the sharpest doorbell stream I’ve ever seen with colors that accurately represent the environment outside, even when it’s gray. It’s also a taller aspect ratio than the widescreen video from Ring’s doorbell, which helps capture the full height of whoever is at your door. There’s a medium-quality video setting to help save on bandwidth — useful if your ISP has a data cap — and a low-quality setting for when you’re in a weak network area. The night vision is grayscale and can discern whether it’s sunlight peeking through or a floodlight.

You will have to pay an annual fee for cloud storage for the Nest Hello. By default, Nest offers three hours of video footage and unlimited notifications, which is great if you’re always at home. If you have other Nest security cameras around, it’s merely another $5 per month to add it to an existing subscription, though it’s $10 per month (or $100 per year) if it’s your only camera and you want logs up to ten days. There’s also a $30 per month option for logs up to one month. This subscription, which is called Nest Aware, also includes those familiar faces alerts, the ability to zoom in on footage, and activity zones. If you’re committing to the cost of the doorbell, you might as well make the most of its features with the Nest Aware subscription, but it is something you need to budget for.

There is a limited bit of smart home integration with the Nest Hello, though it doesn’t extend much beyond the company’s device ecosystem. At the very least, there’s some Google Assistant compatibility, including the ability to enable announcements if you have a Google Home smart speaker. You can also stream the doorbell camera to any Chromecast-enabled device. Automation junkies won’t get their fill here, though, as there are only limited abilities available for the Nest Hello in IFTTT.

The smart lock category isn’t as competitive as video doorbells, at least not in the fatal sense where you’re choosing one ecosystem over another — after all, Yale makes smart locks for Amazon, too. But if you want to stick with Nest, you might consider the Nest x Yale lock because it’s designed to work specifically with this family of devices.

Installing the lock is accessible enough for anyone who feels comfortable wielding a screwdriver. The hardest part of the installation is mounting the Yale lock so that it’s straight. If you can draft an extra set of hands and eyes to help you on the other side of the door, setup will go much more smoothly.

After you’ve installed the four AA alkaline batteries on the indoor side of the lock (which Nest says will last you a year of use), you’ll hear a voice prompt guiding you to set a master PIN code. Once that’s done, you can start pairing the device with the Nest app. Unlike the Nest Hello, the Nest x Yale lock requires a centralized hub of sorts to connect to WiFi and pair with other Nest devices in the house. You can purchase the bundle that includes the Nest Connect for $279 to help bridge this gap. I used the sold-separately Nest Guard security hub, which is stuffed with much of the same hardware and which I already had set up as a part of the Nest Secure.

The Nest x Yale lock isn’t a necessary part of the connected home experience, but it sure is a convenient thing to have when you’re feeling shrouded in anxiety. I love the ability to unlock the front door from my car out in the parking lot so that I’m not struggling to get into the house as I’m carrying bags of groceries. I like that all I have to do to lock the house behind me as I’m rushing out the door is push a button. There’s even a Privacy Mode, which ensures that no one can get in without the app on their smartphone, even if they know the master password. My husband and I have also chosen our own PIN codes, and the Nest app logs each time one of us enters and exits. It does get occasionally tedious to type on the keypad every time you unlock the door, but the tradeoff is that the door is always locked. There is no manual key fallback either, though if the lock’s battery dies, you can rejuvenate it by touching a 9-volt battery to the set of prongs located on the bottom of the front panel.

There are few automation schemes available for the Yale lock, though they’re handy. There’s an option that allows you to disarm the Nest Guard as the door unlocks, and one that automatically locks the door when you’re away, which it detects by whether your phone is at home. I hope that down the line there are more automation schemes made available, like the ability to turn on the lights when the door unlocks, since other Yale locks already work with Google Assistant and Amazon Alexa.

If you don’t already have Nest products set up in your house, then steer clear of the lock on its own. Yale offers a variety of different connected locks without the Nest branding, including ones that already work with your digital assistant of choice. Even if you can afford it, there is not much synergy between this lock and other connected gadgets, and automation between it and other Nest devices is still too limited to justify its current price tag.

The Nest Hello is a different story. On its own, it’s a great doorbell, with some of the highest-resolution video this device category has to offer at the moment. Its machine learning abilities won’t protect your stuff from getting nabbed, but it will keep you informed of who is around. And its companion app is responsive and easy enough for anyone to use.

Combined, the Nest Hello and the Nest x Yale lock can bring your standard entryway into line with the rest of your smart home, while providing a sense of security to help you rest easy at night.